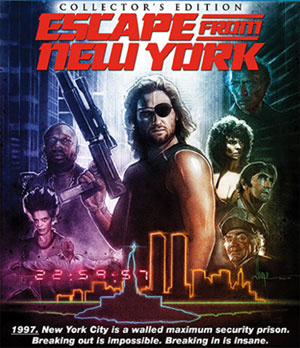 Fans of John Carpenter’s films had plenty to celebrate with Shout! Factory paying special attention to many of the director’s films. Fortunately for fans, the next turn will be Escape From New York, one of the filmmakers most successful and acclaimed movies, scheduled as a Collector’s Edition Blu-Ray Disc in April!

A thrilling landmark film that jolts along at a breakneck pace, “Escape From New York” leapt to cult status with high-octane action, edge-of-your-seat suspense and the mind-blowing vision of lone warrior Snake Plissken (Kurt Russell) battling his way out of a post-apocalyptic Manhattan.

In a world ravaged by crime, the entire island of Manhattan has been converted into a walled prison where brutal prisoners roam. But when the US president (Donald Pleasence) crash-lands inside, only one man can bring him back: notorious outlaw and former Special Forces war hero Snake Plissken (Kurt Russell). But time is short. In 24 hours, an explosive device implanted in his neck will end Snake’s mission – and his life – unless he succeeds!

Arriving as a 2-disc set, the release will feature a brand new transfer of the movie, along with a new Commentary Track, featuring actress Adrienne Barbeau and directory of photography Dean Cundey. The existing Commentary Track with director John Carpenter and actor Kurt Russell, as well as the commentary by producer Debra Hill and production designer Joe Alves will also be included on the release, offering plenty of insight into the film and its production.

On the second disc of the release you will also find some hot new materials, such as the Visual Effects Featurette ”Big Challenges in Little Manhattan”, and a Discussion with composer Alan Howarth, called ”Scoring the Escape”.

Also new is On Set with John Carpenter: The Images of ‘Escape From New York’ with photographer Kim Gottlieb-Walker, as well as new Interviews with actor Joe Unger in ”I Am Taylor”, and with filmmaker David DeCoteau in ”My Night on the Set”.

There will also be a number of bonus features culled from previous releases, such as The Original Opening Bank Robbery Sequence, the Featurette ”Return to Escape from New York”, as well as Theatrical Trailers and extensive Galleries of production stills, behind-the-scenes photos, posters and lobby cards.

“Escape From New York” has been scheduled for release on April 21 for $29.93. If you pre-order the title from Shout! Factory directly, you will receive your copy two weeks early, and will receive an exclusive 18×24” poster featuring the title’s newly commissioned artwork.