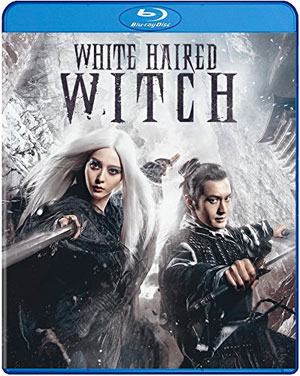 A major action spectacular with plenty of drama to boot, topped with a good dose of breathtaking special effects and stunts, “The White Haired Witch” is a lavish tale of intrigue during the Ming Dynasty, brought to the screen by director Zhang Zhiliang with the help of Hong Kong cinema legend Tsui Hark.

Relentlessly fighting the exploitation of the poor people by the ranking officials, the sorceress Jade (Fan Bing Bing) is at the center of a group of rebels, but when she is double-crossed and implicated in the assassination of the provincial governor, she suddenly finds herself very much alone. Even the man she loves Zhuo Yihang (Huang Xiaoming), appears to have turned against her, since the governor was his uncle.

But as the game of intrigue continues, Jade continues, heartbroken, to expose the real plot behind the assassination and reveals the real murderer.

The release will feature the original Cantonese version of the movie with English subtitles and will be available on DVD for $24.98 and Blu-Ray Disc for $29.98 on March 10.