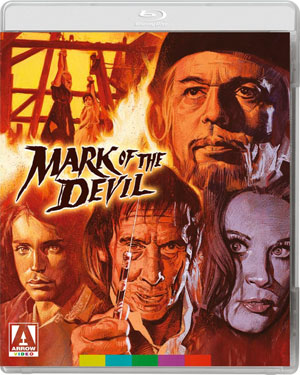 MVD Entertainment and Arrow Films have just added the cult horror film Mark of the Devil to the MVD catalog roster, scheduling a feature-packed Blu-Ray Disc release of the film for March.

Once proclaimed as “positively the most horrifying film ever made”, “Mark of the Devil” arrives in a director-approved edition featuring a new restoration of the feature. A bloody and brutal critique of religious corruption, “Mark of the Devil” sees horror icon Udo Kier play a witchfinder’s apprentice whose faith in his master (Herbert Lom) becomes severely tested when they settle in an Austrian village. Presided over by the sadistic Albino (a memorably nasty turn from Reggie Nalder), the film presents its morality not so much in shades of grey as shades of black. Written and directed by Michael Armstrong, who would later pen “Eskimo Nell,” “The Black Panther” and “House of the Long Shadows,” this classic shocker has lost none of its power over the years.

The 1080p high definition transfer will be accompanied by the original English and German audio tracks and newly translated subtitles.

In addition, the 2-disc Blu-Ray version will contain an Audio Commentary by Michael Armstrong, moderated by Calum Waddell, as well as ”Mark of the Times”, an exclusive feature-length documentary on the emergence of the ‘new wave’ of British horror directors that surfaced during the sixties and seventies.

In ”Hallmark of the Devil” author and critic Michael Gingold looks back at Hallmark Releasing, the controversial and confrontational distributor that introduced “Mark of the Devil” to American cinemas, while Interviews with composer Michael Holm and actors Udo Kier, Herbert Fux, Gaby Fuchs, Ingeborg Schoner and Herbert Lom will give viewers more insight into the making of the film itself.

Visit the locations of the film and how they appear today in ”Mark of the Devil: Now and Then” and enjoy a number of Outtakes, as well as a Photo Gallery.

The release comes with a Reversible Sleeve that features the original and a newly commissioned artwork by Graham Humphreys.

An Illustrated Collector’s Booklet, featuring new writing on the film by Adrian Smith and Anthony Nield, plus an interview with Reggie Nalder by David Del Valle, all illustrated with original stills and artwork, is also included on the release.