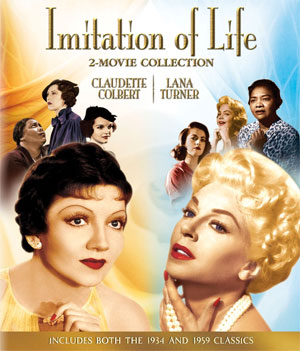 Universal Home Entertainment has just added a Blu-Ray version of the classic Imitation of Life to its roster, releasing both, the 1934 and the 1959 version of the movie in high definition in early April.

Based on the 1933 best-selling novel, “Imitation of Life” is one of the most beloved and respected stories of all-time. This emotionally charged drama chronicles the lives of two widows and their troubled daughters as they struggle to find true happiness in a world plagued by racism.

The “Imitation of Life” Collection includes both versions of the film, the original 1934 Best Picture nominee starring Claudette Colbert and the 1959 masterpiece starring Lana Turner. But don’t let the age of these films fool you. With storylines tackling racism, romance, family, success and tragedy, “Imitation” of Life is a powerful story that still resonates with audiences today.

Arriving on two discs, the first disc will feature the 1934 version of the film with a DTS HD Master Audio 2.0 Mono track and a Commentary Track with African-American Cultural Scholar Avery Clayton.

Both films will also come with their respective Theatrical Trailers.