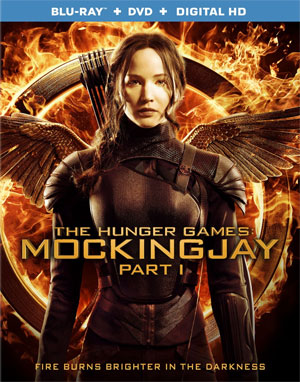 Lionsgate Home Entertainment has just revealed details and specs for the impending release of the eagerly awaited The Hunger Games: Mockingjay – Part 1, sating the release on Blu-Ray Disc and DVD for early March.

Based on the best-selling third novel of Suzanne Collins’ award-winning trilogy, “The Hunger Games: Mockingjay – Part 1” reveals that the rebellion is growing. Katniss Everdeen (Jennifer LAwrence), girl on fire, has survived and is recovering from the cruel and haunting Quarter Quell deep inside the bunkered catacombs of District 13. Separated from some of her closest allies and fearing for their safety in the Capitol, Katniss finally agrees to be the Mockingjay, the symbolic leader of the rebellion. Still uncertain as to whom she can trust, Katniss must help District 13 rise from the shadows, all the while knowing that President Snow has focused his hatred into a personal vendetta against her—and her loved ones.

The DVD version will feature a Commentary Track by Director Francis Lawrence and Producer Nina Jacobson, as well as a selection of Deleted Scenes. A Sneak Peek of ”The Divergent Series: Insurgent” will also be included on the disc.

The Blu-Ray version will include all the bonus materials from the DVD version, but will further supplement the release with an 8-part feature-length Making Of Documentary called ”The Mockingjay Lives”. In addition “Straight From the Heart: A Tribute to Philip Seymour Hoffman” will also be included, as well as “Songs of Rebellion: Lorde on Curating the Soundtrack”.
The Lorde Music Video “Yellow Flicker Beat” will round out the release.

“The Hunger Games: Mockingjay – Part 1” has been scheduled for release on March 7 with a $39.99 sticker price for the Blu-Ray/DVD + DigitalHD Combo and $29.95 for the DVD version.