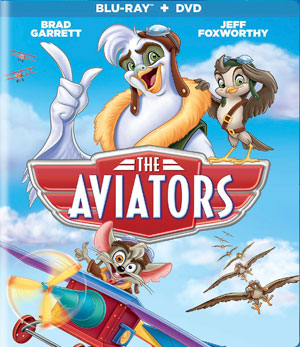 VIVA Pictures and Cinedigm have just unveiled details about the upcoming release of The Aviators, an animated family film by famed animator Miquel Pujol, scheduling the release on Blu-Ray Disc and DVD in February.

Based on a true story set during World War I, “The Aviators” follows the adventures of a courageous, albeit clumsy, group of pigeons and their sidekick, a resourceful engineer mouse (Jeff Foxworthy). When their small farm is turned into a military training post and communications centre for the Allies, the group of unlikely heroes enlists as carrier pigeons and bravely complete airborne missions to assist the soldiers on the battlefield. When given their biggest assignment yet, the team bands together to save the day and soar into history!

No bonus features have been announced for the title, but you can own “The Aviators” when it flies onto retail shelves on February 3 for $19.95 on Blu-Ray and $14.98 on DVD.