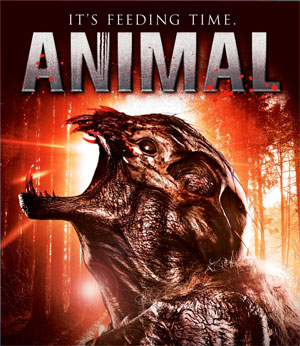 Shout! Factory has just announced another title that has been slated for release under its Scream Factory label. Animal, a chiller directed by Brett Simmons, will hit Blu-Ray Disc and DVD in February.

There’s a part of the wilderness you haven’t explored yet.  The deeper you go, the darker it gets. Something ominous is lurking and ready to plumb the weakness of the human psyche. “Animal” features a generous dose of suspense terror and follows a group of close-knit friends finding themselves stranded in unfamiliar territory, pursued by a menacing, blood thirsty predator.  Holed up in an isolated cabin, tensions mount as long-buried secrets are revealed.  As the body count rises, the group must put their differences aside and fight for survival.

The release will also include a Commentary Track by director Brett Simmons and cinematographer Scott Winig, as well as the movie’s Theatrical Trailer. In addition, you will also find Interviews with the cast on the release, as well as Behind-The-Scenes Footage.