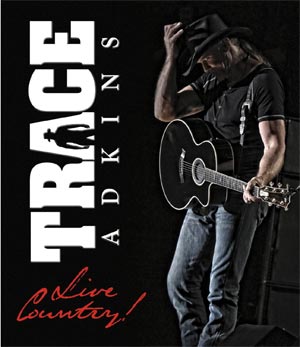 Eagle Rock Entertainment will ring in 2015 with Trace Adkins’ new live DVD Live Country!, giving you the chance to experience and celebrate one of the acclaimed country superstar’s concerts at home. The release is scheduled for January.

“Trace Adkins: Live Country!” is a 116-minute concert DVD shot at The Paramount in Huntington, NY in August 2014. The 20-song set includes Adkins’ high-octane hits, “Honky Tonk Badonkadonk,” “Ladies Love Country Boys,” “Songs About Me,” and “Chrome,” as well as moving ballads like “You’re Gonna Miss This,” and “Every Light In The House.”

In addition to the show itself, the DVD will also contain a bonus Interview with Trace Adkins.