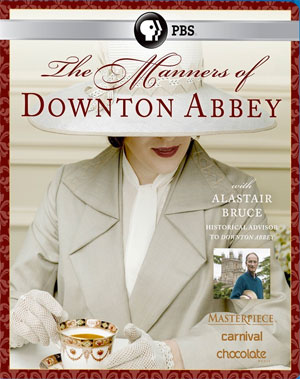 As a perfectly suited companion piece to their upcoming release of the Masterpiece production, “Downton Abbey: Season 5,” PBS Distribution is also preparing a very detailed behind-the-scenes look at the show’s involving production with the film The Manners of Downton Abbey, which is scheduled for release on Blu-Ray Disc and DVD in January also.

Hovering just off camera on the set of “Downton Abbey” is the man who watches the actors’ every move. The director? No, it’s the historical advisor, Alastair Bruce, guaranteeing that the behavior above stairs and below stairs is true to the period of 1900s Britain.

Alastair Bruce, who holds the prestigious Order of the British Empire, is an expert on royal ceremony and custom, and has been the on set advisor to cast and crew since season 1. Among his responsibilities is to consult with the actors on how to speak, stand, sit, eat, drink, dress, and keep a stiff upper lip.
With exacting precision, Bruce explains the intricacies of correct manners and behavior.“It’s so difficult to take people back in time to when rules were so different,” Bruce says. “The manners of Downton are not just about how to address a Duchess…it’s much more important than that. It’s key to how these people lived and exactly what they believe in…their manners held the old order in place when everything else seemed to be falling apart.”

In the film, interviews with many of the show’s leading cast members add perspective about the demanding norms that rule their characters’ lives. The program includes many memorable moments from the series, along with comments from the actors about how key scenes were filmed.

For example, Hugh Bonneville, who plays Robert, Earl of Grantham, recounts that in one emotional scene during season 3, he felt the story called for him to embrace Matthew Crawley (Dan Stevens). “But Alastair said, ‘Don’t be ridiculous! You might just shake his hand – just.’”

Michelle Dockery, who plays Lady Mary, says, “Alastair is known on set as ‘The Oracle’ because he knows everything!” She adds, “I’ve sometimes said to Alastair, ‘Can I lean back in my chair just a little bit,’ and he said, ‘Absolutely not – never in front of your grandmother!’”

These are just two examples of the countless details that are being overseen by Alastair Bruce and worked on by the cast and crew, and “The Manners of Downton Abbey” is a treat for “Downton Abbey” fans, or anyone who loves history for that matter, this program goes behind the scenes during the filming of the beloved show.