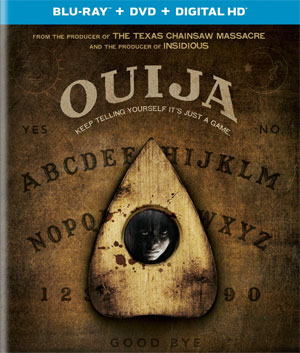 Universal Home Entertainment has added the horror thriller Ouija to its release line-up, bringing the movie that is inspired by the occult board to Blu-Ray Disc and DVD in February.

After Debbie (Shelley Hennig) suddenly dies, her best friend Laine (Olivia Cooke) attempts to contact her using an antique Ouija board she finds in Debbie’s room. When the curious teen begins asking the board questions and stumbles upon the mystery of her friend’s death, Laine discovers a resident spirit calling itself DZ, and eerie, inexplicable events begin to follow her.  The group of friends digs deeper into the history of Debbie’s house and are shocked to find that Debbie wasn’t the first victim—and won’t be be the last if they don’t figure out how to close the portal to the spirit world they’ve opened.

The DVD version will also contain the Featurette ”Adapting the Fear”, which allows you to join the cast and crew on set and learn how they adapted this portal to the spirit world into a feature film.

The Blu-Ray version arrives as a combo pack that also includes the DVD and a DigitalHD version. As bonus material you will also find the Featurette ”Adapting the Fear” on the disc, along with ”The Spirit Board: An Evolution”, letting you journey back in time and trace the history of “automatic writing” and “talking boards” as it goes from ritual to novelty act to board game and now movie.
The Featurette ”Icon of the Unknown” is a look at the mystical and scientific explanations for how the Ouija board works. Also, look for a Commentary Track on the release.