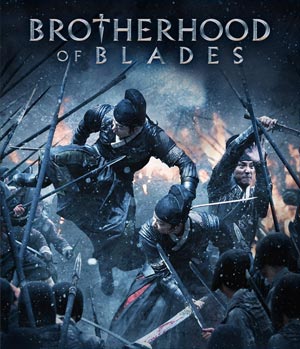 Well Go USA Entertainment has just announced the upcoming release of the Hong Kong actioner Brotherhood of Blades, scheduling a Blu-Ray Disc and a DVD version for February.

Director Lu Yang’s sword-wielding drama that was nominated for four Golden Horse Awards in 2014 is a powerful period film set during the late Ming Synasty, where a young emperor is determined to take down the all-powerful eunuch Wei and purge his supporters.

Lu, Shen Lian and Yichuan are three sworn brothers, and the deadly Secret Police of the Imperial Guard. The new Emperor’s first mission for them, find and annihilate the corrupt fugitive Eunuch Wei and his followers. But one mistake reveals the truth—the three men are pawns in a deadly game, unleashing a chain of secrets, conspiracies, and lethal consequences.

Starring Chang Chen, Ye Qing, Chin Shih-chieh, and Wang Qianyuan, “Brotherhood of Blades” will be released on February 10 for $29.99 on Blu-Ray Disc and $24.98 on DVD.