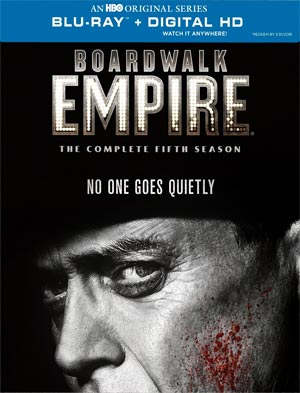 It is time again to roll up the carpets to avoid bloody stains on them, because HBO Home Entertainment has just announced the upcoming release of Boardwalk Empire: The Complete Fifth Season in January.

Concluding a powerful and groundbreaking run of the acclaimed and highly anticipated show, season 5 of “Boardwalk Empire” jumps forward six full years to 1931. In stark contrast with the Roaring ‘20s, the country is now in the throes of the Great Depression, and with the end of Prohibition in sight, Nucky Thompson (Steve Buscemi) is looking to legitimize himself by forging alliances with liquor producers.

The release arrives on Blu-Ray Disc and DVD and like the previous season releases, the Season 5 set will once again include Commentary Tracks with cast and crew members, as well as ”Scouting the Boardwalk”, an in-depth look behind the scenes and the locations of the show.

“Boardwalk Empire: The Complete Fifth Season” comes to stores on January 13 with a $79.98 sticker price for the Blu-Ray version and $59.99 for the DVD version.