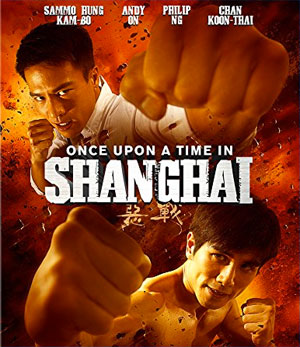 Well Go USA Entertainment has scheduled director Wong Ching Po and acclaimed Action Director Yuen Wo Ping’s action film Once Upon A Time In Shanghai for release on Blu-Ray Disc and DVD in January.

Everyone wants to make their fortune in Shanghai, and Ma Yongzhen (Philip Ng) dreams of making an honest living – not with his fists. But the town is torn apart by rival gangs and when Boss Long Qi (Andy On) learns of Ma’s formidable martial arts skills, he’s brought into the family. Opposed to drug trafficking and leaking government secrets, Qi makes powerful enemies. And soon, Ma won’t have a choice. Fight or lose everything – including his friend (Sammo Hung) and his love, Tie Ju (Michelle Hu).

The movie finally gives rising action star Philip Ng center stage with this rebooted look at the hero Ma Yung-Chen, who was immortalized in the 1972 Shaw Brothers film ”Boxer from Shantung” and in the 1997 ”Hero”. Ng, a master of martial arts, trained in Ving Tsun Kung Fu under the late Sifu Wong Shun-Leung and is also a 6th generation disciple of Choy Li Fut Kung Fu, training under his father, Sam Ng. Ng also excels in Hung Gar Kung Fu, Tae Kwon Do, Jiujitsu and Escrima.

The release will feature the movie itself along with the Behind-the-scenes Featurette “The Making of Once Upon a Time in Shanghai.”