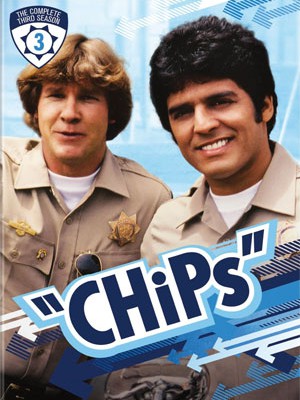 Warner Brothers Home Entertainment has just added CHiPs: The Complete Third Season to its release roster, bringing all 24 episodes of the show’s third season to DVD for the very first time in March.

In this wildly popular action-drama Golden Globe nominated Erik Estrada and Larry Wilcox return as high-spirited California Highway Patrol motorcycle officers Francis “Ponch” Poncherello and Jon Baker.  Pursuing justice was never cooler as these two fearless partners take to the roads under the bright Southern California sun.  Nothing stops them from joining the action… from high-speed car chases to confrontations with armed criminals… CHP officers Ponch and Jon are on patrol—ready, willing, and more than able.

Last season, Ponch and Jon  were on the lookout for all sorts of criminal operations.  That continues this season in the comedic melodrama fashion that only Ponch and Jon can provide as they continue to  catch  people who have been menacing the L.A Freeways. Whether it’s staging an accident as part of an insurance scam or punks breaking into cars, California Highway Patrol is there to stop them.

Arriving as a 5-disc DVD set, the release will feature all 24 one-hour episodes that make up the show’s third season, complete with Dolby Digital 5.1 audio. According to the specs, no extras will be included on the release, however.

“CHiPs: The Complete Third Season” will roll into stores on March 3 with a $29.98 sticker price.