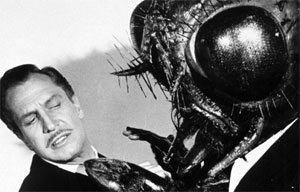 Over the past years, Shout! Factory and their Scream Factory label have become a dominant player in the horror genre, releasing beautiful Blu-Ray versions films that studios traditionally sidestep. Among some of these gems are the films by the great Vincent Price, and the studio has gather seven films on four discs here as a collection, bringing some of Price’s timeless horror gems back to life in wondrous glory, and there was no way I could possibly pass up the opportunity to revisit them in high definition.

On the heels of Roger Corman’s incredibly spooky adaptations of Edgar Allan Poe’s work, the director also opted to add two comedies to the roster at the time. The first was “The Raven” in 1963, very loosely adapted from the Poe short story by the the same name. Almost a homage to his own work, Vincent Price, Boris Karloff and Peter Lorre make this movie an unforgettable romp in which two wizards duel for power and the affection of the same woman. Taking place in a cob-webbed castle, filled with medieval instruments of torture and every trope the genre had to offer, “The Raven” is a classy and absolutely timeless gem.

It is followed up by “The Comedy of Terrors,” once again starring Vincent Price, Boris Karloff and Peter Lorre, this time in roles that seem intriguingly reversed. Based on a script by Richard Matheson, the film could just as well have been a Poe adaptation, as it dives into and mocks everything we loved so much about Corman’s work.

Things get more somber in “The Tomb of Ligeia,” another Poe adaptation in which Vincent Price once again plays the part of a reclusive man, tortured by the memories of his past and the love he lost. Unlike some of the other film in the cycle, “Tomb of Ligeia”is notably slower, however, and does not exhibit the same kind of dungeon-gloominess of the other films, but instead opts for many outdoor daytime scenes. 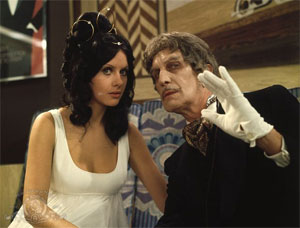 In the 1958 film “The Return of the Fly,” Vincent Price returns to the role he played a year earlier in “The Fly,” continuing the fantastic story of a scientist’s experiments gone horribly awry.

Also included in the collection is “The Last Man on Earth,” also penned by Richard Matheson. The film is a dark post-apocalyptic vision of a lone survivor after a disease wiped out mankind. But he is not alone, because the disease has turned its victims into undead creatures of the night. Many of you may recall this story also as “The Omega Man” and ore recently as “I Am Legend,” which are different film adaptations of the same Matheson novel.

“House on Haunted Hill,” is true haunted house classic that has also seen many incarnations on celluloid, but here we have the atmospheric black and white film that will send shivers down your spine.

The last film in the collection is “Dr. Phibes Rises Again.” After the success of the original Dr. Phibes movie, Vincent Price returns here to the part of the maniac scientist in a story that is even darker than the original, and that is filled with the same charming avant-garde photography that made the first film such a surprise success. 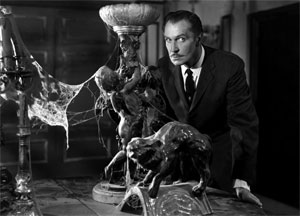 Each of the movies in this collection is presented in a remarkable high definition transfer. I call it remarkable because I do not recall ever having seen these movies with such clarity and so much detail. “The Raven,” for example, as well as “The Comedy of Terrors” are awash in color. The presentation revels in the hues and renders even the smallest image details perfectly, which is impressive because many previous incarnations of these films had a tendency to look flat and somewhat muted.

The same is true for the other films, all of which have faithful and incredible detailed transfers, and offer wonderful black levels that give the image solid visual depth at all times. The improvement of these transfers over previous DVD versions is instantly noticeable and makes this collection a worthy candidate for anyone wishing to upgrade their presentation.

Each of the film comes with an assortment of bonus features, including introductions by Vincent Price on the Poe adaptations. There are also plenty of featurettes and interview segments, as well as commentary tacks to accompany some of the films in the set. Trailers, TV Spots, Still Galleries and other goodies spruce up each of the film, making this release a real treasure trove.

And then there is a 32-page full-color booklet with liner notes by David Del Valle, which also contains countless still photos and poster reprints.

If you are a fan of Vincent Price’s films, there can be no doubt that this is a Blu-Ray set that needs to go in your collection right now. Shout! Factory once again went all the way to restore these films to their original glory, free of defects and with incredibly luster, adding numerous bonus features to accompany each of the movies. Things just don’t get much better than this.