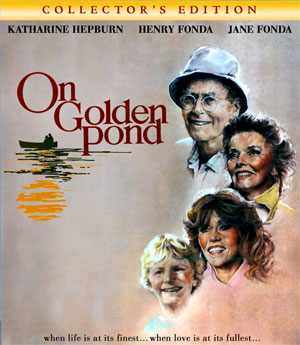 Shout! Factory announced another title in their line-up today, bringing you a Blu-Ray Collector’s Edition of On Golden Pond in January.

Henry Fonda masterfully plays Norman Thayer, a prickly retired professor who visits his summer home with his loving wife, Ethel (Katharine Hepburn). Soon after they are joined by their daughter, Chelsea (Jane Fonda, in her only on-screen teaming with her father), her fiancé Bill (Dabney Coleman), and his son Billy (Doug McKeon). The cantankerous Norman develops an unlikely bond with young Billy, providing the framework for an emotional summer in which the Thayers’ strained familial relationships are finally allowed to heal and take wing.

The release will feature the movie itself in 1080p high definition, but will also be accompanied by a Commentary Track with director Mark Rydell, as well as the Featurette ”Reflections on Golden Pond” and the Featurette ”A Woman of Substance: Katharine Hepburn Remembered”.

The release will be rounded out with the movie’s Trailer.