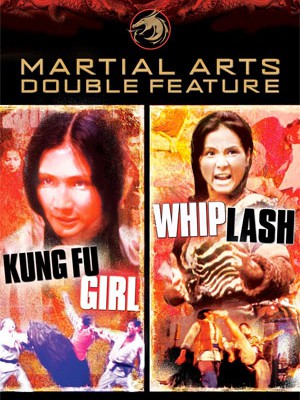 Shout! Factory has just added a new title to its release roster, scheduling an action-packed double feature of Kung Fu Girl and Whiplash for release on DVD in December, celebrating two of the most sought-after films by martial arts actress Pei-Pei Cheng.

In “Kung Fu Girl,” the Empress Dowager flees when the allied forces descend upon the capital. During an attack by bandits, her jewels are lost in the mountains. Ten years later, a local villager finds the treasure. When news of the found jewels spreads, a group of bandits descends upon the town hoping to find the treasure, but first they’ll have to deal with the villager’s daughter, Tigress (Pei-Pei Cheng), who is quite dangerous due to her amazing fighting skills. This is the first U.S. release of the complete 119-minute version of “Kung Fu Girl.”

“Whiplash” takes place during the early days of the Chinese Republic, where General Yuan has proclaimed himself the new Emperor of China. When young students protest his treaty with Japan, one of the students, Tsai, is arrested by Lei, the Chief of Security. Tsai’s young sister (Pei-Pei Cheng) poses as Lei’s long-lost sister in hopes of finding and rescuing her brother.

No notable bonus materials will be included on this double feature DVD.