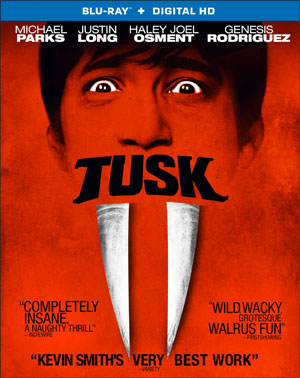 Lionsgate Home Entertainment has just added Kevin Smith’s modern-day monster comedy Tusk to its roster, lining the film up for release on Blu-Ray Disc and DVD in December.

A podcaster (Justin Long) looking for a juicy story is plunged into an unpredictable, unsettling and absurd nightmare after he travels to the backwoods of Canada to meet an eccentric recluse (Michael Parks) with a lifetime of adventures-and a disturbing fondness for walruses.

Funny and terrifying, “Tusk” will also include an Audio Commentary with Writer/Director Kevin Smith, as well as a number of Deleted Scenes.

The original Podcast ”The Walrus and The Carpenter” that inspired the film will also be included, as well as the Featurettes ”20 Years to Tusk” and ”The Making of Tusk”.