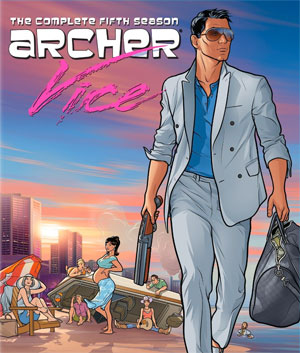 Archer: The Complete Season Five lands on Blu-Ray Disc and DVD in January, according to the information that Twentieth Century Fox Home Entertainment has just sent out.

Join suave super-spy Sterling Archer and his fellow covert government operatives for more irreverent adventures across the globe. With an overabundance of cocaine at their disposal, the team forms a cartel and sets out to sell the drug. As this dubious new venture speeds into hilarious motion, the team deals with addiction, Cheryl’s turn as a country singer, an FBI bust, an open marriage, Kenny Loggins, a South American dictator, and an announcement Archer couldn’t have imagined in his murkiest, tequila-influenced haze.

The release of the sexy, animated TV show will feature all 13 outrageous episodes from the show’s action-packed fifth season and will come with a cool stash of classified extras.

There will, for example, be the ”Midnight Blues” Music Video by Cherlene Tunt on the release, along with a Cherlene Tunt Interview on “Wake Up Country.”

As another extra, you will find Old MacDonald Pam Poovey Had a Farm, The Musical on the release.