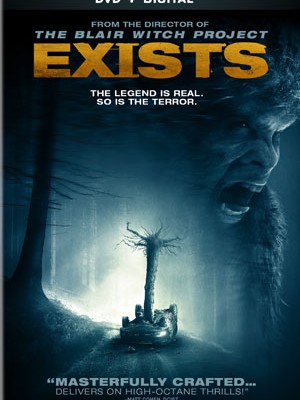 Lionsgate Home Entertainment has added Exists to its release line-up, scheduling a DVD version of the film by the director of “The Blair Witch Project, ” Eduardo Sanchez, for release in early February.

For five friends, it was a chance for a summer getaway—a weekend of camping in the Texas Big Thicket. But visions of a carefree vacation are shattered with an accident on a dark and desolate country road. In the wake of the accident, a bloodcurdling force of nature is unleashed—something not exactly human, but not completely animal—an urban legend come to terrifying life…and seeking murderous revenge.

Much in the vein of “The Blair Witch Project,” takes you back to the woods in this first-person account of a legend on a deadly attack.

The release includes an Audio Commentary with director Eduardo Sanchez, Deleted Scenes and two Behind-the-scenes Featurettes called ” 21 Days in the Woods” and ”Bringing Bigfoot to Life”.