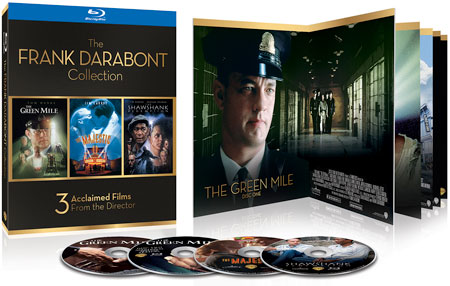 Warner Brothers Home Entertainment has added The Frank Darabont Blu-Ray Collection to its line-up, bringing a collection of three of the director’s films to Blu-Ray in February. The set will include the 15th Anniversary Edition of The Green Mile, the Blu-Ray debut of The Majestic along with The Shawshank Redemption.

The Green Mile film recounts the emotional, uplifting story of Paul Edgecomb (Tom Hanks), a Southern prison Death Row guard, who develops an unusual and profound relationship with John Coffey (Michael Clarke Duncan), a massive black man convicted of brutally killing a pair of nine-year-old sisters. Beyond his simple, naive nature and a deathly fear of the dark, Coffey seems to possess a prodigious, supernatural gift, which leads Edgecomb to question whether Coffey was truly guilty of his crime.  As the story unfolds, Paul Edgecomb learns that sometimes, miracles happen in the most unexpected places.

The release also comes with the multi-part Featurette ”Miracles and Mystery”, which covers aspects such as “Stephen King: Storyteller,” “The Art of Adaptation,” “Acting on the Mile,” “Designing the Mile,” “The Magic of the Mile” and “The Tail of Mr. Jingles”.

The Majestic plays in the year 1951 and ambitious Hollywood screenwriter Peter Appleton (Jim Carrey) is suddenly targeted as a suspected Communist.  He loses his job and his girl in quick succession and then in a serious car accident, he’s left with amnesia, losing his identity altogether. Stumbling into a charming small California town where he’s mistaken for Luke Trimble, one of their many long lost World War II heroes, Peter meets Luke’s beautiful girlfriend Adele (Laurie Holden). His “father” Harry (Martin Landau) reintroduces Peter to the life he led before the war, and they work together as father and son to restore and reopen The Majestic, the town’s long abandoned movie palace. Though his true memory eventually returns, Peter falls in love with Adele during his sojourn in the town, and he discovers the courage and the conviction he needs to become the hero of his own life.

The Shawshank Redemption is the moving portrayal of a friendship between men under the harshest of circumstances. Tim Robbins plays Andy Dufresne, who is serving a life sentence in the Shawshank prison for killing his wife. He meets Red (Morgan Freeman) and the two become friends, bond over the years and eventually find peace and solace through acts of common decency.

The film will also contain bonus materials culled form previous releases, such as a Commentary Track by Writer/Director Frank Darabont and the Documentaries ”Hope Springs Eternal” and “Shawshank: The Redeeming Feature.”
Also included on the release is The Charlie Rose Show Segment Featuring Darabont, Tim Robbins and Morgan Freeman. To add further value to the release you will also find the Comic Spoof The Sharktank Redemption and Stills and Collectibles Galleries on the release, along with the movie’s Theatrical Trailer.

“The Frank Darabont Blu-Ray Collection” will be available on February 24 for only $29.99!