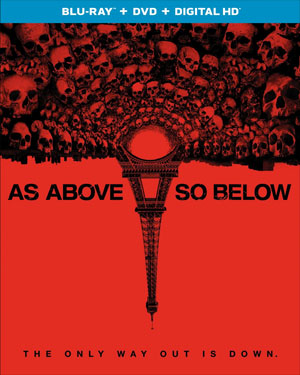 Universal Home Entertainment is putting the final touches to the release of As Above, So Below, releasing the film on Blu-Ray Disc and DVD in December.

Miles of twisting catacombs lie beneath the streets of Paris, the eternal home to countless souls. When a team of explorers ventures into the uncharted maze of bones, they uncover the dark secret that lies within this city of the dead. A journey into madness and terror, “As Above/So Below” reaches deep into the human psyche to reveal the personal demons that come back to haunt us all.

The DVD version will feature an anamorphic widescreen transfer with Dolby Digital 5.1 audio. The disc will also contain the Featurette ”Inside As Above/So Below”.

The Blu-Ray version will feature a 1080p high definition presentation of the film, complemented by a DTS 7.1 HD Master Audio track. The Featurette ”Inside As Above/So Below” will also be included on this version, along with a DigitalHD version of the film.