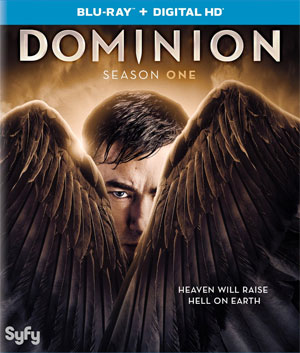 Universal Home Entertainment has added Dominion: Season One to its line-up, scheduling the ScyFy TV show for release on Blu-Ray Disc and DVD in late December.

“Dominion” is an epic supernatural drama set in the near future. Specifically, 25 years after “The Extinction War,” when an army of lower angels, assembled by the archangel Gabriel, waged war against mankind. The archangel Michael, turning against his own kind, chose to side with humanity. Rising out of the ashes of this long battle are newly fortified cities which protect human survivors. At the center of the series is the city of Vega, a glistening empire that has formed from the ruins of what was once Las Vegas.

The DVD version of the show will arrive in anamorphic widescreen with a Dolby Digital 5.1 audio track as a 2-disc set. As an extra, the release will also include a GagReel.