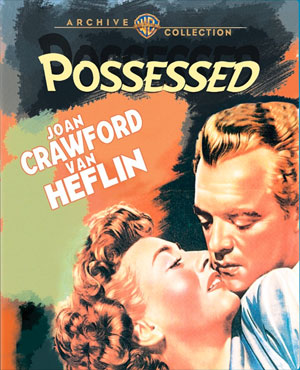 Joan Crawford solidified the career renaissance begun with her masterful turn in Mildred Pierce with her electrifying performance in “Possessed.” Much like the heroines she portrayed, Crawford triumphed over an industry that too often disposed of its leading ladies at the first hint of maturity by reforging herself as a star via her indefatigable  will, talent, and fight. Here she stars as a woman found wandering the streets of Los Angeles and taken to a mental hospital where she weaves a harrowing tale of insanity, murder and the passion by which she became possessed. Louise Howell’s (Joan Crawford) psychiatrist learns that she is a nurse hired to care for a dying woman and rekindled a former romance with her patient’s neighbor, David Sutton (Van Heflin). But the suicide of her charge and rejection by the man she loves drive Howell to madness‹and murder. Or do they? Is her harrowing story true or the misperception of a deranged mind? And is Howell guilty of murder or an innocent victim of something far more sinister?

This Film Noir classic, all shadows and suggestion, is now available on Blu-Ray Disc as part of the Warner Archives with a beautiful, chiaroscuro-clear 1080p high definition transfer.

In addition to the high definition presentation, the disc also includes a Commentary Track by Film Historian Drew Casper, as well as the Featurette ”Possessed: The Quintessential Film Noir”. The movie’s Original Theatrical Trailer rounds out the disc.