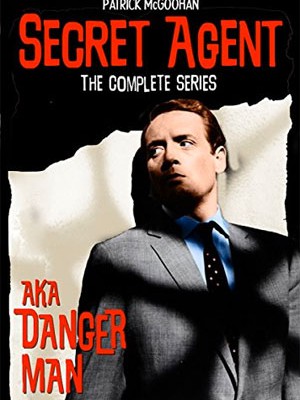 “Every government has its secret service branch. America, CIA; France, Deuxième Bureau; England, MI5.  NATO also has its own. A messy job? Well that’s when they usually call on me or someone like me. Oh yes, my name is Drake, John Drake.” So begins the dramatic 1960s British spy series “Secret Agent.”

Patrick McGoohan (The Prisoner) stars as John Drake in Secret Agent, the popular television series from the Golden Age of Spy Thrillers, the 1960s. Travelling the world to capture international criminals, John Drake rarely solved problems with a gun, preferring to use charm and wit over violence to bring in the bad guys.

Coming to you as a 17-disc DVD Box Set all 86 episodes from its successful broadcast run, “Secret Agent” (known in the United Kingdom as “Danger Man”) will be an essential addition to the collection of any spy thriller fan.

As a cool other extra, the release will also include a new Interview with Catherine McGoohan.

“Secret Agent: The Complete Series” will come to stores on December 9 from Timeless Media Group with a $79.97 sticker price.