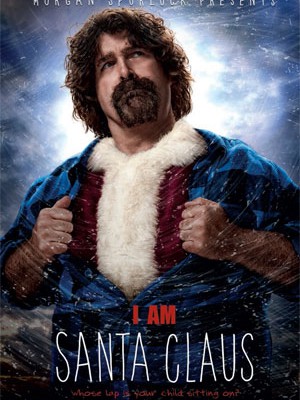 Part of the ongoing “Morgan Spurlock Presents” film label, Virgil Films and Entertainment will release their latest film I Am Santa Claus on Blu-Ray Disc and DVD in November.

Few parents give much thought to the jovial man in the Santa suit who promises their kids they’ll get everything they want for Christmas. If they did, they might be surprised. The new documentary “I Am Santa Claus” looks at the men who put on the red suit every December and selflessly commit themselves to making anonymous children happy. Directed by Tommy Avallone and produced by Hall of Fame professional wrestler, Mick Foley, “I Am Santa Claus” is the latest film that’s being release as part of the successful “Morgan Spurlock Presents” film label.
Everyone thinks of Santa Claus as a magical figure without flaws, but the men who keep his legend alive, real-bearded professional Santas, are rarely anything like the jolly old Saint Nick we’ve all grown up knowing. In reality, the mall Santa in your cherished children’s photo has problems just like the rest of us. Even the most jovial of men fall victim to divorce, job loss, insecurity and even the occasional hangover.

Tommy Avallone’s documentary “I Am Santa Claus”—featuring Hall of Fame pro wrestler (and producer of the film) Mick Foley, who knows a thing or two about make-believe—follows the lives of five professional Santas for an entire year, as they anticipate and prepare for Christmas season and then return to their “real” lives during the off-season. We see who they actually are: flawed, flesh-and-blood men who nevertheless feel a great responsibility to protect the spotless reputation of the “Red Suit.”

Also appearing in the film are pro wrestling’s Roddy Piper and Jerry Lawler, iconic actor Sid Haig and the actor who calls himself… Santa Claus.

As extras, the release will also inlcude a Commentary Track and the Featurette ”Santa vs. Santa: The Santa Wars.”.