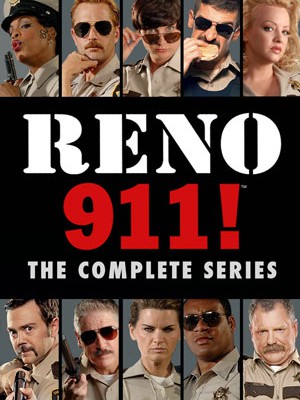 Paramount Home Entertainment has released information about the upcoming release of Reno 911!: The Complete Series, offering up all six seasons of the comedy show as single DVD box set in November.

“Reno 911!” lets viewers ride shotgun with the courageous men and women of the Washoe County Sheriff’s Department as they lay down the law and put their lives on the line. Whether the Deputies are busting down the doors of a meth lab or busting “moves” at a local nightspot, the Reno 911! camera doesn’t blink.

Besides including all the episodes from all six seasons, completely uncensored, the release will also include hours of bonus content, including Commentary Tracks on thirty-two episodes!

You will also find over one hour of Deleted, Alternate and Extended Scenes on the release, as well as almost two hours worth of Outtakes.

Two Featurettes will also be part of the package, giving you a look at “Cops Psychology: Inside the minds of Reno’s Deputies” and “Profiles in Valor.”