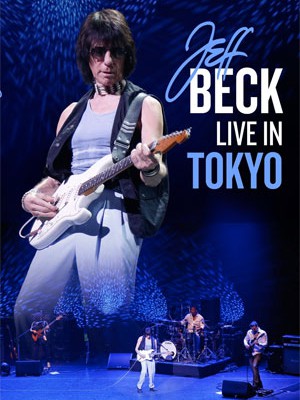 Fans of guitar legend Jeff Beck will be excited to hear that Eagle Rock Entertainment has just added Jeff Beck: Live in Tokyo to its roster, bringing the concert release to Blu-Ray Disc and DVD in late November.

Jeff Beck is undeniably one of the world’s greatest guitar players. Technically brilliant, he is renowned for pushing musical boundaries and has excelled across many different genres from rock and jazz to pop and blues. His versatility and unmatched musicianship is captured beautifully on Live In Tokyo.

Filmed at the Tokyo Dome City Hall in Japan on April 9th 2014, these Japanese dates were the first to feature Jeff Beck’s new backing band of Jonathan Joseph (drums), Nicolas Meier (guitars) and Rhonda Smith (bass). The setlist includes some freshly minted songs that fans will never have heard before. In contrast to Beck’s previous visual releases, Performing This Week…Live At Ronnie Scott’s and Rock ‘N’ Roll Party (Eagle Rock Entertainment), which both filmed in small clubs, Live In Tokyo is filmed in a major concert arena and has a very different, more expansive feel.

The show features Jeff Beck with his new band performing some brand new, as yet unreleased, material. The set also includes “Stratus,” “Led Boots,” “Cause We Ended As Lovers,” “Big Block,” “A Day In The Life,” “Rollin’ And Tumblin’” and many more.