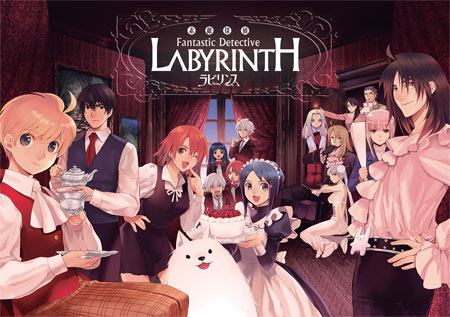 Thirty years ago, Tokyo was destroyed in a massive earthquake. Most people have moved on to a new capital, Shinto, but a string of bizarre murders and supernatural events keep occurring in the ruins of the old city. The only one with the ability to see through to the heart of these mysteries is the enigmatic Mayuki Hyuga, a boy with extraordinary detective skills and powers that even he doesn’t yet understand. Together with his guardian and butler Seiran Shinano, Mayuki must not only help the police solve cases, but also uncover the secrets of his lineage.

Also known as “Suteki Tantei Labyrinth,” this DVD set will feature all 25 episodes of the series with Japanese audio, English subtitles, and English on-screen translations.

The release will also include an Interview with opening theme composers Kannivalism, as well as the Clean Opening, Clean Closings, Commercials, and Promotional Videos.

“Fantastic Detective Labyrinth” will be released as a 5-disc DVD set on January 5 for $49.99.