When the studio can’t decide what to call film, the movie is usually in big trouble. With confusion abound, one really has to wonder what’s going on with the latest Tom Cruise vehicle. During its theatrical run it was called “Edge of Tomorrow” but now that it arrives on Blu-Ray Disc, the movie seems to have been renamed, since the words “Live Die Repeat” are plastered in enormous letters across every ad page, banner and the film’s packaging. Even the disc itself is labeled with both titles. Perhaps, someone realized that “Edge of Tomorrow” really didn’t work well as a title, because it didn’t create any connotations and associations relating to the movie, whereas “Live Die Repeat,” truly encapsulates the film’s essence and should really have been the title in the first place, in my humble opinion. I have no doubt it would have improved the film’s lackluster boxoffice performance quite a bit. Be that as it may, Warner Home Video has prepared “Edge of Tomorrow” for release on Blu-Ray and I was eager to check it out. 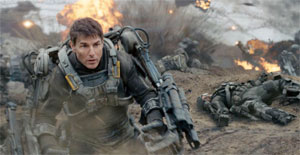 Playing in the not too distant future, Major William Cage (Tom Cruise) is a PR officer who unexpectedly finds himself in the middle of the war he originally expected to cover only through a camera lens. Thrust into the front lines with absolutely no combat experience, no knowledge how to work his exo-skeleton combat suit, he dies within five minutes of the beach landing of his troop, trying to defend the world from aliens who have taken over most of Europe by now. Well, at least he managed to take one of the suckers to the grave with him before he died!

And just as unexpectedly as he dies, Cage reawakens one day earlier. The same scenario replays. After being stripped of his rank he is thrown in with a combat group, does some drill exercises and prepares for combat the next morning. And once again he dies almost instantly the moment he sets foot on the beach.

And he reawakens. Over and over again, replaying the scenario again and again, but every time, he is a little bit smarter and eventually he lives long enough to meet Rita Vrataski (Emily Blunt), an infamous veteran of combat who is idolized by everyone for her slaughtering of hundreds of aliens in one day. She recognizes a kindred spirit in him and asks him to find her the next time he awakes.

After falling on the battlefield yet again, Cage instantly sets out to locate Rita and soon finds that she has had the same experience as he does. Together they develop a strategy that allows them to use the experience and knowledge gained from every encounter they die in, to optimize their tactics and get further towards their goal with every step. But even when you can rewind time over and over again, there are limits to what you can do by yourself!

I wasn’t quite sure what to expect from the movie, and given how flat-out formulaic and predictable the past years’ overhyped action offerings have been, I think I didn’t expect much. Very quickly however, I realized that this movie was different. It is is furious and loud, yes, but it is also smart and funny in its own way.

When you play a video game oftentimes you learn your way through levels. You make a mistake, you reload, try again until you know the attack patters at every step by heart and can react to them accordingly. It is a process that internalizes the individual steps to muscle memory, almost, taking you a little bit further every time you try. That is exactly what is going on in the film. Cage and Rita learn to deal with the situations by trial and error, one step at a time, replaying them over and over again until they have them perfected. The path to that perfection is riddled with funny moments and wonderful missteps that give the film a unique note of self-deprecation; like a wink, almost.

The beach landing itself is a beautiful nod at Normandy, and overall, the film is full of little homages to both the action and science fiction genre. The aliens are super-nasty and fast, beautifully visualized as giant rolling balls of metallic tendrils with a vicious head. They mesh perfectly with the world the filmmakers are creating and bring vibrance and color to the otherwise desolate remains of the world.

To counter the computer-generated mayhem, the film has a great cast that roots the experience as a whole. Tom Cruise is playing his fallen-from-grace character with the necessary humility, yet without losing his swagger for too long as his character becomes increasingly familiar and comfortable with his surroundings. 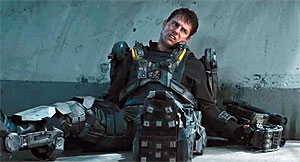 Bill Paxton plays a wonderful parody of a drill sergeant who gets slowly upstaged by Tom Cruise’s character as time goes by. And then there’s Emily Blunt, the big, famous heroine in the film. “The Angel of Verdun,” they call her, or the “Full Metal Bitch,” depending on who you ask. She does a great job, playing the battle-hardened character of Rita, showing both the physical and the emotional toll the war is taking on front line soldiers. but she never loses her humanity and she has faith in Cage every step of the way, creating a cool on-screen team with Tom Cruise for which viewers will root to succeed to the end. The funny moments make her character endearing, but also shows how serious she takes the matter as a whole.

The DTS 7.1 Master Audio track that accompanies the film is also absolutely bombastic. With a brutal dynamic range and solid frequency response, the track is incredibly aggressive and makes virtually constant use of all surround channels. Dialogues are perfectly integrated and always understandable despite the onscreen mayhem that oftentimes accompanies them. 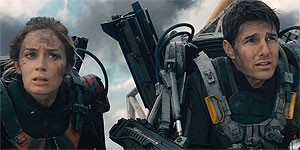 A number of extras accompany the release, including over seven minutes worth of deleted scenes. At the heart of the bonus features is the 42-minute making-of featurette “On the Edge with Doug Liman”, however, which takes a close look at the production as a whole. The production design, the casting, the charcaters and development of the story are covered in this piece, as it will give you a really good look behind the scenes, including the preparation the cast went through for their parts.

“Operation Downfall” is a feature that offers up an alternate cut of the drop landing scene in the film, and it is complemented by an 8-minute featurette discussing the challenges and the approach to the scene in the film that harkens back to the history-making Normandy landings during World War II.

In “Weapons of the Future” the filmmakers discuss the exo-suit form the film, as well as the weapons they designed in a bit more details, while “Creatures Not of This World” covers the design of the aliens in the film.

I thoroughly enjoyed “Edge of Tomorrow.” It was a surprisingly solid movie, although there is a huge error in logic in the film’s final scenes. That aside, it was clever and funny in all the right places. It has heart and action to the hilt. You couldn’t ask for more from a movie like this. It did what it tried to achieve with bravado. Make sure to grab this flick on Blu-Ray and let it throw you right into the action. It is truly a thrill ride.