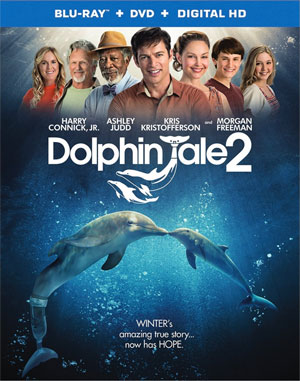 Warner Brothers Home Entertainment has just added Dolphin Tale 2 to its roster of upcoming releases, scheduling a Blu-Ray and a DVD version of the film for December.

The inspiring true story of Winter isn’t over. Several years after receiving a prosthetic tail, Winter loses her surrogate mother, leaving her alone, grieving and unwilling to engage with anyone, even her best human friend, Sawyer. Worse, she may have to be moved from her home at the aquarium due to regulations requiring dolphins to be paired. When Dr. Clay Haskett and his dedicated team can’t find her a companion, it looks like they may lose their beloved Winter…until an unexpected turn of events brings them Hope.

The DVD version will feature the movie itself, along with the Featurette ”Dolphin Tale 2: True Story”.