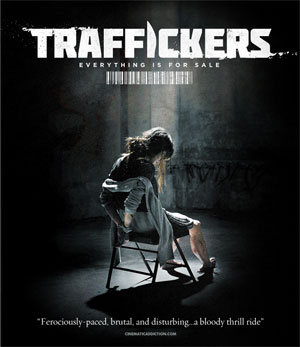 Well Go USA Entertainment has announced the award-winning, action-packed South Korean crime thriller Traffickers to come to Blu-Ray Disc and DVD in December, telling a shocking tale of Korea’s black market, where everything is for sale, even your life.

Young-Gyu was the best. He was an organ dealer, smuggling body parts for sale to the highest bidder. His crew was the best – an organized team of professionals with top skills and no conscience. But when one of them dies on the job, the crew scatters. Now he fronts stolen goods, and has fallen in love with Yoo-Ri, a ticket agent at the port terminal. Her father is dying, and when she turns to a ruthless loan shark for help, Young-Gyu goes on a search to find his old partners for one last job.

The film takes place over six hours on a passenger boat with an ongoing black-market organ-trafficking operation, and a desperate husband out to find his missing wife.

Well Go USA Entertainment has not announced any bonus materials to accompany the release, but you can grab “Traffickers” when it comes to stores on December 23 for $29.98 on Blu-Ray Disc and $24.98 on DVD.