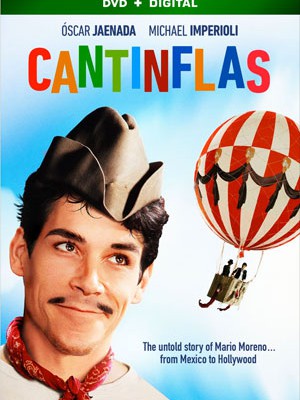 Lionsgate Home Entertainment has added Cantinflas to its line-up, scheduling the untold story of Mexico’s greatest and most beloved comic film stars for release on DVD in December.

In the most successful Hispanic film of the summer, the true story of Mario “Cantinflas” Moreno is brought to vivid life. Nicknamed “The Charlie Chaplin of Mexico,” Cantinflas tries his hand at a number of odd jobs including boxing and bullfighting, finally stumbling to success in small-town bars and theaters. His improvisational quirks and fearlessness send him to the global stage where he becomes a beloved, comedic fixture.

From his humble origins on the small stage to the bright lights of Hollywood, Cantinflas became famous around the world – one joke at a time.  Relive the laughter that has charmed generations.

The release will also include the Featurette ”Cantinflas: From Mexico to the Big Screen”.

“Cantinflas” will arrive in stores around the country on December 2 with a $19.98 sticker price.