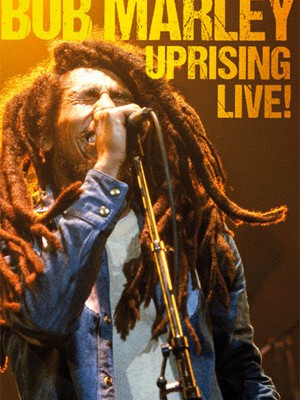 Eagle Rock Entertainment has announced the upcoming release of Uprising Live!, one of the few existing Bob Marley Concert Videos, bringing it to DVD in November.

This is the first ever DVD release of this classic concert, which originally aired on the famed German television series Rockpalast, from Bob Marley’s final tour.

The Uprising Tour ran in Europe from May 30th to July 13th, 1980 with five further dates in the USA in September. It was Bob Marley’s last tour before his tragically early death in May 1981 at the age of just 36. The tour was in support of the “Uprising” album, and just a few days later, this show would be filmed from Dortmund’s Westfalenhalle. Now, Rockpalast is presented here on DVD for the first time, with footage fully restored under supervision of Cedella Marley and Ziggy Marley.

On Uprising Live!, Bob Marley is in superb form and delivers a set full of energy and charisma, including the icon songs “No Woman, No Cry,” “Exodus,” “I Shot The Sheriff,” “Redemption Song,” “Is This Love,” “Jamming,” “Get Up, Stand Up,” “Could You Be Loved” and many more. The show opens with a short set by the I Threes – Marley’s backing vocalists – who traditionally would perform a few songs before Marley took the stage.

Bob Marley: Uprising Live! will make its way into retail stores on November 24 for $14.98 on DVD. A DVD + CD combo version will also be available, but no price point has been announced yet.