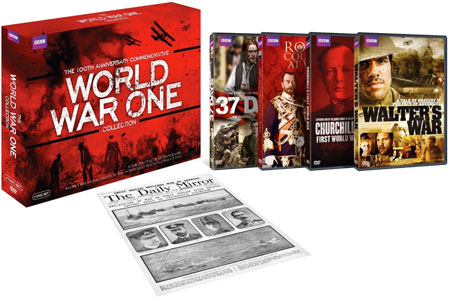 BBC Home Entertainment continues to commemorate the 100th Anniversary of the start of World War One with the Wold War One Collection, a 4-disc set coming to DVD in November.

This collection features four gripping BBC productions ranging from documentary to docu-drama. Together they unlock the mysteries of this important chapter in our history and share a fresh perspective on how it came to be 100 years ago.

“37 Days” covers history from the assassination of the archduke Franz Ferdinand to the tragic declaration of war between Britain and Germany.

“Royal Cousins at War” reveals the uneasy relationships among King George V, Kaiser Wilhelm II and Tsar Nicholas II, and the roles the three cousins played in the frantic days before war broke out.

And in “Walter’s War”, be inspired by the story of Walter Tull, the professional English football star who became a heroic warrior and the first black officer in the British Army.

To enhance the commemorative feel of the release, the set also includes a Collectible Replica of the Front Page of the Daily Mirror from the day war was declared in Europe.

The “Wold War One Collection” will make it to stores on November 4 and can be yours for only $39.98.