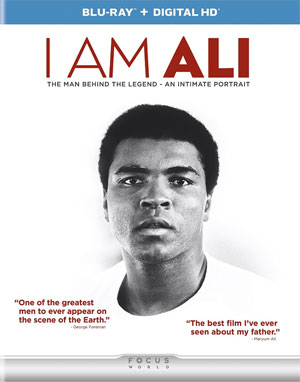 An intimate look at “the Greatest” as he’s never been seen before will arrive in November with I Am Ali, courtesy of Universal Home Entertainment.

“I Am Ali” is an intimate and heartwarming look at the legendary athlete, beloved father, humanitarian, and activist as he has never been seen before. With exclusive access to Ali’s personal archive of “audio journals,” “I Am Ali” features touching interviews and testimonials from his inner circle of family and friends, legends of the boxing community—including former heavyweight champions Mike Tyson and George Foreman—and Ali’s longtime friend and business manager, Gene Kilroy. The film shares the champion’s extraordinary history as a fighter, lover, brother, father, and friend as told by insiders and by the man himself for the very first time.

The release will also include a number of Featurettes, such as ”Fighter” taking a look at Ali’s legendary boxing career, ”Brother” looking at the Civil Rights Supporter, ”Lover” the People’s Champion, ”Father” taking a look at Ali as a family man, and ”The Music” talking about the music that helped tell the story, including hits by Stevie Wonder, Jimi Hendrix, Aretha Franklin, and many more.

The release will also include additional interviews and insights from Ali’s children, friends and former opponents.

The film has be scheduled for release on November 11 and will be available for $26.98 on Blu-Ray Disc with DigitalHD and $19.98 on DVD.