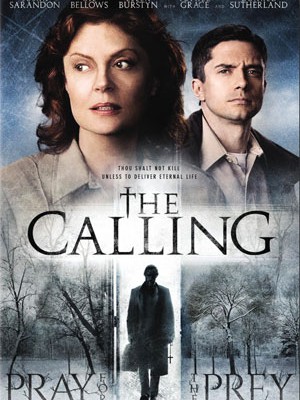 Sony Pictures Home Entertainment is preparing The Calling for release later this month, bringing this thrilling murder mystery to DVD only.

Detective Inspector Hazel Micallef (Susan Sarandon) leads a quiet life with her mother (Ellen Burstyn), her painkillers, and an occasional drink. But when she checks on an ill neighbor, she stumbles upon a gruesome murder that shatters her peaceful existence. With the help of a fellow detective (Gil Bellows) and a transfer cop (Topher Grace), she unearths a series of similar killings across the country. When a local priest (Donald Sutherland) suggests a link to an ancient ritual, Hazel focuses her search on a religious madman with a deadly higher calling. Based on the novel by Inger Ash Wolfe, it’s a journey to the shadowy landscape between faith and fear.

Aside from the feature film, presented in an anamorphic widescreen transfer with Dolby Digital 5.1 audio, the disc will also include the Making-of Featurette “Divine Intention”.