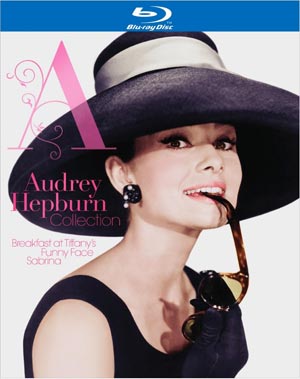 The Audrey Hepburn Gift Set is one of the new Blu-Ray titles that Warner Home Video has lined up for release this fall. Featuring Funny Face, Sabrina and Breakfast at Tiffany’s the studio will celebrated the Oscar-winning actress, fashion icon, and philanthropist  Audrey Hepburn who was known for her beauty, elegance and grace. Often imitated, she remains an indelible symbol of Hollywood glamour.

In Funny Face, Audrey Hepburn and Fred Astaire join forces, lending their song and dance talents to the timeless musical. When a fashion magazine mogul (Kay Thompson) and her head photographer, Dick Avery (Astaire) scout out a bookstore for their next photo shoot, Dick discovers the unique face of bookseller and amateur philosopher Jo Stockton (Audrey). Whisked off to Paris, Jo is soon transformed into a global supermodel…and finds herself falling for the photographer who first notices her sunny, funny face.

The film will be accompanied by a Photo Gallery, the Featurette Paramount in The 50’s and the movie’s Trailer.

Sabrina is charming, humorous and aglow with some of Hollywood’s greatest stars. Humphrey Bogart, William Holden and Audrey Hepburn star in a Cinderella story directed by renowned filmmaker Billy Wilder. Bogie and Holden are the mega-rich Larrabee brothers of Long Island. Bogie’s all work, Holden’s all playboy. But when Sabrina, daughter of the family’s chauffeur, returns from Paris all grown up and glamorous, the stage is set for some family fireworks as the brothers fall under the spell of Hepburn’s delightful charms.

The movie will also offer the Featurettes ”Audrey Hepburn: Fashion Icon,” “Sabrina’s World,” “Supporting Sabrina,” “William Holden: The Paramount Years,” “Audrey Hepburn: In Her Own Words,” “Behind the Gates: Camera,” and “Paramount in the ‘50s”

Directed by Blake Edwards, in Breakfast at Tiffany’s Holly Golightly (Hepburn) delights audiences as the carefree ingénue searching Manhattan for dream millionaire to marry. George Peppard plays the struggling, “sponsored” young writer who gets swept away in Holly’s chaotic-yet-enchanting lifestyle.

The disc for this film will also include the Featurettes ”A Golightly Gathering,” “Henry Mancini: More Than Music,” “Mr. Yunioshi: An Asian Perspective,” “Breakfast at Tiffany’s The Making of a Classic,” “It’s So Audrey! A Style Icon,” “Behind the Gates: The Tour,” “Brilliance in a Blue Box,” and “Audrey’s Letter to Tiffany” as well as Photo Galleries and the movie’s Theatrical Trailer.