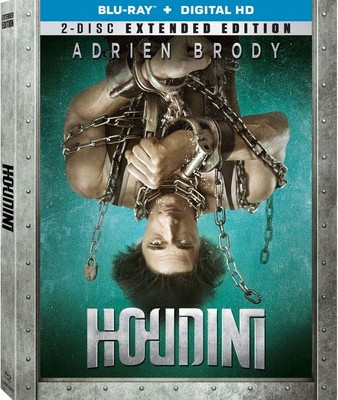 Lionsgate Home Entertainment has announced details about the upcoming release of Houdini, a History Channel TV event that will arrive on DVD and Blu-Ray Disc in October.

His ability to escape from handcuffs, strait-jackets and water tanks is legendary – breaking the shackles of his past proved more challenging. “Houdini” follows the world-renowned master of escape’s transformation from immigrant into the world’s first superstar.  Driven, disciplined and actively chasing the American Dream, Houdini (Adrien Brody) constantly pushed his physical limits to accomplish feats of strength that amazed audiences in an age of spectacle. And though they saw what he wanted them to see, his reality was more elusive than his escapes.

Arriving as a 2-disc Blu-Ray version and a 2-disc DVD version, the release will feature both the original History Channel televised version as well as a brand-new extended edition with over 20 minutes of additional film footage of the captivating series.

In addition, both versions will also include a number of Behind-the-Scenes Featurettes, such as “The Great Escapes,” “The Real Houdini,“ “Cheating Death” and “Houdini the Greatest”.

“Houdini” will escape the studio and make it to a store near you on October 7 and can be yours to own for $29.99 on Blu-Ray Disc and $26.98 on DVD. Both versions will also include digital copies.