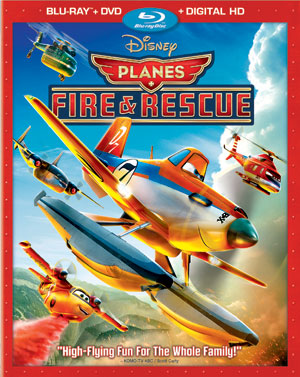 “Planes: Fire & Rescue” is a new animated comedy-adventure about second chances, featuring a dynamic crew of elite firefighting aircraft devoted to protecting historic Piston Peak National Park from raging wildfire. When world-famous air racer Dusty (voice of Dane Cook) learns that his engine is damaged and he may never race again, he must shift gears and is launched into the world of aerial firefighting. Dusty joins forces with veteran fire-and-rescue helicopter Blade Ranger (voice of Ed Harris) and his courageous team, including spirited air tanker Dipper (voice of Julie Bowen), heavy-lift helicopter Windlifter (voice of Wes Studi), ex-military transport Cabbie (voice of Captain Dale Dye) and a lively bunch of brave all-terrain vehicles known as The Smokejumpers. Together, the fearless team battles a massive wildfire and Dusty learns what it takes to become a true hero.

The DVD version of the film will also contain the Spencer Lee Music Video ”Still I Fly”.

If you want more supplements, the Blu-Ray Combo PAck will make you happy. It will also contain the Exclusive Animated Short “Vitaminamulch: Air Spectacular”, as well as ”Welcome to Piston Peak!,” a mock-umentary promotional piece that shows off all the highlights of the acclaimed Piston Peak National Park and its aerial firefighting team.

Also included is “CHoPs” TV Promo, an in-world TV promo with announce and high-energy, music-driven behind-the-scenes Featurette ”Air Attack:  Firefighters From The Sky”, which takes an inside look at the real smoke jumpers and firefighters who attack wildfires from the air as Director Roberts Gannaway and Producer Ferrell Barron take us through their journey in making the film.