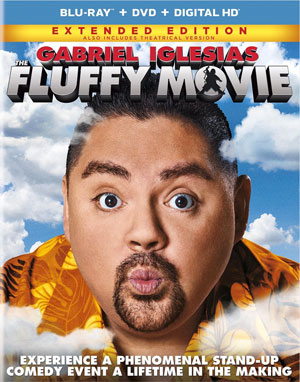 Universal Home Entertainment has added Gabriel Iglesias’ Fluffy Movie to its roster, bringing an Extended Edition of the film to Blu-Ray Disc and DVD in late October.

Gabriel “Fluffy” Iglesias, the world-famous Hawaiian shirt-clad comedian, takes viewers on a joke-filled journey into his life in this nonstop laugh fest.  The funnyman delves into subjects such as the joys of parenting a teen, the similarities between India and Mexico, and more hilarious observations, while also providing fans with special backstage access and exclusive never-before-seen footage from his sold-out Unity Through Laughter tour. See Fluffy himself unleashed, as he puts his animated storytelling, spot-on impressions and vivid sound effects on display before audiences around the world in this must-own comedy event.

Featuring the theatrical version of the film, the release also offers up an Extended Edition providing exclusive never-before-seen footage from this year’s sold-out “Unity Through Laughter” national tour with the sidesplitting Gabriel “Fluffy” Iglesias.