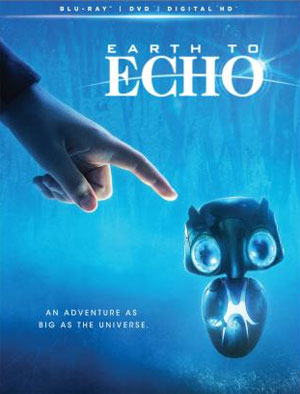 “earth to Echo” tells its tale through the eyes of Tuck, Munch and Alex, a trio of pals who make an out-of-this-world discovery. After receiving signals on their phones, they meet Echo, a small, but amazingly energetic, alien trying to make his way back to his home planet. As they race to help their new friend, the boys will discover that little Echo has touched their hearts in unexpected ways and changed their lives forever.

The DVD version will include the feature film in anamorphic widescreen with Dolby Digital 5.1 audio, along with the Featurette “Friends No Matter How Far” and the movie’s Theatrical Trailer.

The Blu-Ray version offers up a 1080p high definition transfer with DTS 5.1 HD Master Audio, and contains a number of additional extras aside from the ones found on the DVD, such as six Deleted Scenes, and the Featurettes “Creating the Truck Scene,” “Casting the Characters”, and the Making of Featurette “We Made That!”.