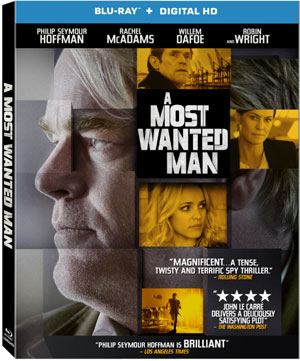 Lionsgate Home Entertainment has scheduled A Most Wanted Man for release on Blu-Ray Disc and DVD this coming November.

German intelligence agent Günther Bachmann (Philip Seymour Hoffman) must race against time to solve a perilous mystery: Is the half-Chechen, half-Russian Muslim who’s surfaced in Hamburg a victim seeking refuge… or a terrorist seeking revenge? Hoffman’s mesmerizing turn as Bachmann will glue you to your seat until the final, shattering conclusion of this John le Carré thriller.

The release will feature a 1080p high definition transfer with DTS 5.1 HD Master Audio track on Blu-Ray. In addition, it will also contain the Featurettes ”The Making of A Most Wanted Man” and ”Spymaster: John le Carré in Hamburg. It will also contain a DigitalHD version of the movie.