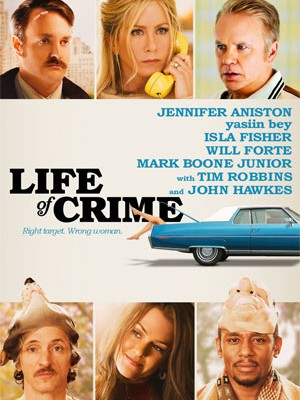 Lionsgate Home Entertainment is bringing the crime comedy about a kidnapping gone awry, Life of Crime, to Blu-Ray Disc and DVD this fall.

Based on the novel “The Switch” written by Elmore Leonard, “Life of Crime” tells the story of pampered housewife (Jennifer Aniston) who is kidnapped by a pair of blundering ex-cons in an effort to extort money from her sleazy real-estate tycoon husband (Tim Robbins), the perfect crime becomes the perfect opportunity for the husband to ride off into the sunset with his sexy young mistress (Isla Fisher) until the housewife decides it is her turn to even the score.

Also starring Will Forte , Yasiin Bey, John Hawkes and Mark Boone Junior, the release will also include a Commentary Track with Screenwriter/Director Daniel Schechter and Actor Will Forte.

In addition, the disc will contain a selection of Deleted Scenes as well as the Featurettes ”Behind-the-Scenes of Life of Crime,” “Envisioning the Big Picture: Shooting Crime” and ”Hit & Run: Choreographing Mayhem”.