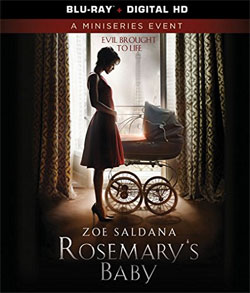 Lionsgate Home Entertainment has just announced the upcoming release of the 2014 TV mini-series, Rosemary’s Baby, starring Zoe Saldana. Based on the best-selling suspense novel by Ira Levin and featuring a teleplay by James Wong, the releases is scheduled for an August release.

Set in present-day France, Rosemary’s Baby centers on a young married couple that escapes New York and moves to Paris with hopes of leaving their sad past behind. After a series of unfortunate events, Rosemary (Zoe Saldana) and Guy Woodhouse (Patrick J. Adams) are presented with an offer they can’t refuse – an apartment at the most prestigious address in the city. Problem is, it comes with a haunted past, and an immeasurable price.

The Blu-Ray version of the release will also contain two bonus Featurettes, called “Fear is Born: The Making of Rosemary’s Baby” and “Grand Guignol: Parisian Production Design,” discussing the respective subjects of the movie’s production.