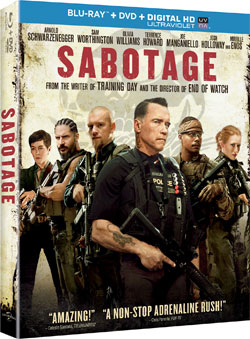 Arnold Schwarzenegger stars in the pulse-pounding action film Sabotage, from the director of End of Watch and the writer of Training Day. When DEA task force leader Breacher Wharton (Arnold Schwarzenegger) storms a heavily armed cartel safe house, rogue members of his team use it as a cover to steal $10 million in cash. But just when they think their secret is safe, agents are killed off one-by-one, and everyone is a suspect, including the squad itself. Co-starring Sam Worthington, Olivia Williams, Terrence Howard, Joe Manganiello, Josh Holloway and Mireille Enos, Sabotage is an explosive tale of betrayal and trust.

“Sabotage” arrives as a DVD version as well as a Blu-Ray/DVD combo with Ultraviolet HD. Both releases will also contain a selection of Deleted Scenes and Alternate Endings, along with the Featurette Making Sabotage, giving you a behind-the-scenes look at the production.

“Sabotage” will be in stores on July 22.