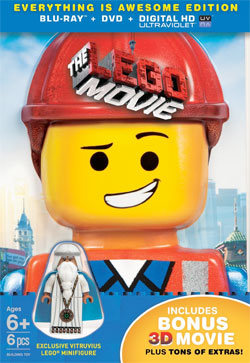 Warner Home Video has announced the upcoming release of The LEGO Movie on DVD and Blu-Ray Disc, scheduling the film for June.

The original 3D computer-animated story follows Emmet, an ordinary, rules-following, perfectly average LEGO mini-figure who is mistakenly identified as The Special, the most extraordinary person and the key to saving the world.  He is drafted into a fellowship of strangers on an epic quest to stop an evil tyrant, a journey for which Emmet is hopelessly and hilariously underprepared.

The 2-disc DVD version of the release will also feature a Commentary Track, as well as a variety of Featurettes, such as ”Batman: A True Artist,” “Michelangelo and Lincoln: History Cops,” “Enter the Ninjago,” “Bringing LEGO® to Life,” “Everything is Awesome Sing-Along,” “See it! Build it!,” “Stories from the Story Team,” “Fan-Made Films: Top Secret Submissions,” “Outtakes,” “Additional Promotional Content,” “Alleyway Test” and a selection of Deleted Scenes.

The Blu-Ray combo will include the same features but offer up even more supplements, such as the Featurette “Dream Job: Meet The LEGO® Builders”.

“The LEGO Movie” will be in stores on June 17 and can be yours for $28.98 on DVD, $35.99 on Blu-Ray and for $59.99 as a Blu-Ray edition that also includes an exclusive LEGO Vitruvius minifigure, a bonus 3D movie, collectible 3D Emmet photo, and exclusive bonus content.