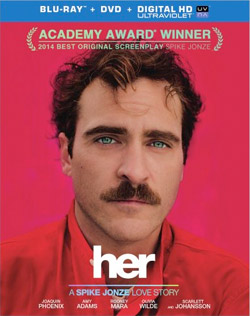 Warner Home Video has just announced the upcoming release of Spike Jonze’s heartfelt love story for the modern era, Her, scheduling the film for Blu-Ray Disc and DVD in May.

Set in Los Angeles in the slight future, “Her” follows Theodore (Joaquin Phoenix), a complex, soulful man who makes his living writing touching, personal letters for other people.  Heartbroken after the end of a long relationship, he becomes intrigued with a new, advanced operating system, which promises to be an intuitive and unique entity in its own right.  Upon initiating it, he is delighted to meet “Samantha,” a bright, female voice (Scarlett Johansson) who is insightful, sensitive and surprisingly funny.  As her needs and desires grow, in tandem with his own, their friendship deepens into an eventual love for each other.

The DVD version will feature the movie along with the featurette Her: Love in the Modern Age

The Blu-Ray version arrives as a Blu-Ray/DVD and Ultarviolet combo that will present the film in a 1080p high definition transfer that will be accompanied by the Featurettes “The Untitled Rick Howard Project,” “How Do You Share Your Life with Somebody” and ”Her: Love in the Modern Age”.