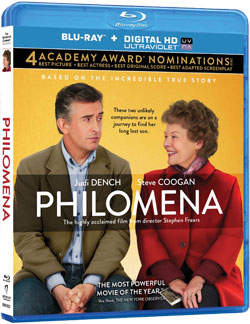 Anchor Bay Entertainment and The Weinstein Company have just announced the home entertainment release of the critically acclaimed comedy/drama Philomena, directed by Stephen Frears, scheduling the release of April.

Judi Dench stars in the story of Philomena Lee, mother to a boy conceived out of wedlock and given up for adoption.Â  Nearly 50 years later, Philomena meets Martin Sixsmith (Steve Coogan), a former BBC reporter looking for his next big story.Â  Together, they embark on a journey to locate her long lost son.Â  As the pieces of the puzzle come together, the unlikely travel companions form a comic and heartwarming friendship.Â  Based on the 2009 investigative book by Martin Sixsmith ”˜The Lost Child of Philomena Lee‘, the film adaptation has been hailed as “a triumph for Judi Dench.Â