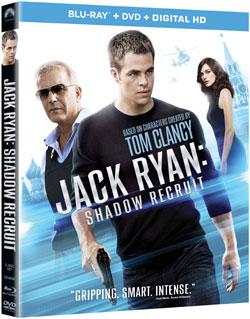 Paramount Home Entertainment has just announced details about the upcoming release of Jack Ryan: Shadow Recruit as a Blu-Ray combo pack, scheduling the movie for a June release.

Starring Kevin Costner and Chris Pine, “Jack Ryan: Shadow Recruit” is the latest movie installment in the Tom Clancy thriller franchise, in which a CIA veteran and a new recruit uncover a terrorist plot to devastate the United States.

The film will be available as a Blu-ray Combo Pack with Ultraviolet Digital HD and nearly an hour of bonus material. Among the features you will find Featurettes, such as Jack Ryan: The Smartest Guy in the Room, which explores the Jack Ryan character in more detail, and Sir Kenneth Branagh: The Tsar of Shadow Recruit offering up a look at the film’s imposing adversary played by Sir Kenneth Branagh. Other featurettes will cover Jack Ryan: A Thinking Man of Action and Old Enemies Return.

The release will also include Deleted and Extended Scenes, as well as a Commentary Track by director and star Kenneth Branagh and Lorenzo di Bonaventura.